In March of 2019, my photograph "Cold Winter" was chosen as a winner of the Snow Scenes Assignment by the Outdoor Photographer Magazine. Several months later, I was approached by the managing editor asking me to write an article about this photograph for the Behind The Shot section of the December 2019 print edition. It has now been published.

Here it is for those of you who do not have the print issue of the magazine. 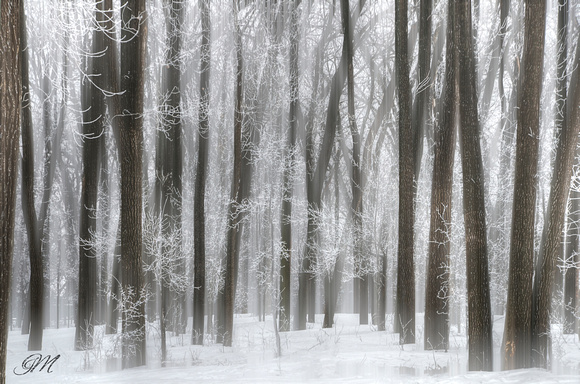 I live in Miami, FL because it is as far away from sub-zero temperatures as I can get without leaving the country. So when work took me to Bismarck a few winters ago, the fact that North Dakota tops the list of coldest states in the US had not escaped me. It’s not that I hate the cold; the problem is that it only ever triggers an irresistible desire to curl up in bed and hug the covers all day. Add to that a forecast of cloudy conditions for the duration of my stay, and it didn’t look like I would be taking too many photographs on my trip.

But the lure of fabulous fresh snow proved harder to ignore than my aversion to its side-effects. Foregoing my preferred photography hours of sunrise and sunset, I ventured out in the middle of the afternoon in temperatures that, to a Miamian, felt like a hundred below (likely not quite that far below freezing). I went to the Sertoma Park—also known as Riverside—a large municipal park along the Missouri River, home to an amusement park, the Dakota Zoo, the Lewis and Clark riverboat, walking trails, picnic shelters and a number of other recreational activities. Normally filled with visitors, the parking lot was deserted with the exception of a lone polar explorer walking his dog. Surrounded by towering snow piles and with my Nikon D7000 and my go-to lens for travel, the Tamron 18-270, at the ready, I set off down the Riverfront Trail.

Everything around me was bland and white: the ground, the trees, even the sky. But the frost on the tree branches was gorgeous; to emphasize it, I decided to fill the frame with nothing but trees. There was not a lot of variability in my subject, so I found a composition that showed the most perspective and depth and set my focus to about a third of the way into the scene. This technique works well when the scene as a whole is the subject. I set the aperture to f/11 to allow for good depth of field for the first few layers of trees with some blurriness toward the background. Shutter speed was set to 1/160 of a second to avoid worrying about any camera shake while handholding. ISO of 200 eliminated noise in a crop-sensor camera.

Usually, when I’m out shooting, cold or heat bother me much less, but it didn’t take long before I started to lose sensation in my fingers and toes. My face felt like it had been commandeered by Madame Tussauds, and I could feel myself working my way up to one of those borderline panic attacks warm-weather people suffer when they become convinced that frostbite and lost limbs are the only possible outcome of their winter wonderland hubris.

Satisfied I had already scraped together more shots than I had dared hope for, I fled to my car and retreated to the nearest purveyor of warm beverages. I later processed my RAW file as HDR to bring out more contrast and then added a low opacity layer of vertical blur to smooth out the trees and emphasize the frost-covered branches.